Though he builds his unique wooden boats using today’s techniques of strip plank, lamination and cold-moulding, David Moss designs them the traditional way. David Moss Boatbuilders is based in the old port of Skippool, within the Wyre Estuary country park.

We meet however in the Lake District where we’ve come to sail the 15′ (4.6m), Sea Otter. Built by David and his team, this is just one of a range of traditional boats David has designed totally by hand with an eye for style and performance.

Elsie II, one of David’s range of Sea Otter canoe yawls from 13′ to 25′ (4 – 7.6m) is, without doubt, a beautiful boat. From her tan sails with main and mizzen, a deep interior encased with cold moulded strip planking and superb finish, she’s a stunner.

David smiles when he says that he prefers owners who he likes and who appreciate his style of bespoke service. And it sounds like he has also brought together a group who also enjoy working together on diverse projects. His team includes three other boatbuilders, a lady painter/varnisher and an engineer who are all yard taught working on a great variety of craft. I can only imagine they receive wonderfully detailed training, as it must be rare to be working for such a passionate craftsman.

DELIGHT IS IN THE DETAIL
Turning to the Sea Otter, it’s easy to spot the care and attention that has gone into Elsie II’s design and build. With her deep cockpit and curved decks, you can clearly see the wonderful strip plank and cold moulded woodwork. She’s been built to last, using woods like iroko and yellow cedar which won’t rot even after extended periods in the water. Danger areas that are prone to damage or rot, such as the side decks, have been carefully shaped to prevent water from getting trapped and causing damage at a later date.

The tiller is a masterpiece of design and woodworking skills. It has been shaped so the tiller fits around the mizzen mast, but is also beautifully curved to fit over the stern; this breathtaking attention to detail pervades the whole boat. All the fittings are of the highest quality, the rudder fittings, for example, are bronze, made by the local foundry. The sails are from sailmaker Graham Caws on the Isle of Wight and the cream paint – often used on David’s boats – is from Epifanes.

She looks so beautiful that I wonder what she’ll feel like on the water. The nice thing about David’s boats is that they are designed and built as traditional classic boats to their owners’ requirements rather than a set of rules. They not only look good but also have excellent sailing performance.

In fact, there’s no engine at all, how very refreshing. This is a boat that relies on winds and the skills of the skipper to get about. The only aid is a set of beautifully made oars, which are stowed neatly into the interior. The top of the centreboard case has also been beautifully carved to make an ergonomically designed seat, ideal when rowing.

David takes the oars and rows us out into the variable gusts that are whistling down Ullswater. With the sails set, I take the helm and the main sheet and ease her downwind. She does handle beautifully, even though she’s carrying a pretty big main. It could easily be reefed but it seems a shame to cut down on the sail area in the lulls. However, you do notice the power when a gust hits and my only comment would be that if she were my boat I’d make sure the mainsheet could run more easily, either by using a thinner line or reducing the purchase on the mainsheet blocks. By this stage in the afternoon, the wind is becoming flukey but I find her easy enough to handle, so much so that we end up exploring into the upper areas of the lake, where the wind really does go round in circles. Just as we’re about to resort to rowing, enough wind fills in to nudge us gently back to the pontoons.

CROSSCUT
While we’re on the water, I ask David if the owners are presented with their half models when their boat’s completed? Oh no, he says laughing. I wonder why not. It’s only then that he explains to me that once the model has been created to the right shape and to the owner’s satisfaction aesthetically, he then saws crosswise through the model, like slicing a loaf, to obtain the shapes of each section from which to build the boat, the true traditional boatbuilder’s way – and not a CADCAM system in sight! 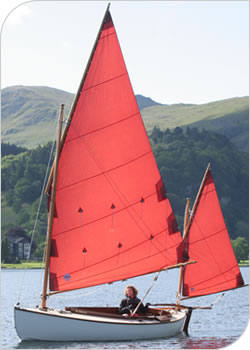